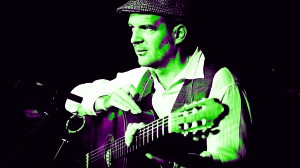 Born in March 1965 in Judenburg, Austria studied in Graz Classical and Jazzguitar and finished his studies in the USA from 1986-89 New England Conversatory and the Berklee School of Music. He was an  integrated part of the US-jazz scene for many years. Gary Burton engaged the young Wolfgang as successor of Pat Metheny in his band and he played and recorded with a lot of well known musicians like Peter Erskine, Paul Motian, Gary Peacock, Larry Grenadier or Gabrielle Goodman (listen to the CD: Until we Love!!!!). In New York - mid of the 90s he started a long lasting collaboration with the Norwegian singer Rebekka Bakken.

In 2002 he turned back to Austria and lives now in Vienna where he founded a new record label called "Material Records".

Vienna Naked is his latest album called. From my point of view this album - which will be released only on June 15, 2012 - has chances to get on the shortlist for the "Jazz Album of the Year". Watch and listen ....

The press information of Material record mentiones: »Vienna Naked« is the first step of a long-term project which will see a group of songs evolve from solo stages, through an intimate live pre- sentation (3 players on stage); further recording with new songs and ultimately a larger presentation with some special guests and old friends both on record and on the concert stage.﻿﻿