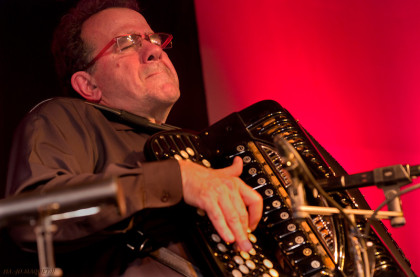 During the Dresdener Jazztage we had the pleasure to see and listen to the Richard Galliano Septet with its homage to Astor Piazzola. Richard Galliano changed the history of the accordion – he took it out of the Tango- and Musette corner and developed the instrument almost in the direction of a standard instrument in different music styles.

Before the concert we had some minutes to talk to this great musician about his plans and projects.  A musician who is familiar with Jazz as well as classical music and world music.

From his youth onwards, his inspiration has always been the music of J.S. Bach and Jazz. He even feels these inspirations when walking around in Dresden. He felt Bach – the same happened to him also in Leipzig in summer 2012 where he also performed and where Bach lived and worked.

He doesn’t like these boxes people sometimes try to put music – he crosses all borders easily and he insists of not being seen in one of these famous boxes. “Music has to entertain the musician and there must be progress. Always to play the same things would be boring”.

How is music developing? This only works when suitable partners are meeting, when musicians harmonize and influence each other. "It works or it doesn’t – you only have to try it."

Richard tells us of the recording of the Los Angeles Sessions to the CD-project LOVE DAYS. The ideas was to record in the famous Capital Record Studios, studios where already big shots like Nat King Cole or Frank Sinatra recorded major parts of their work.  Richard invited some musicians to the session he knew already from the past: Gonzalo Rubalcaba (p), Charlie Haden (b) and Mino Cinelu (dr)

Being skeptical at the beginning if they will find a joint basis it worked out that he extremely positive harmonized with Gonalzo Rubalcaba, who joined him later for the LOVE DAYS tour. The cooperation with Charlie Haden ended after the CD production. Richard feels that life is too short to work with too complicated people.

In this context it was interesting to learn by Richard that the difference between European and American musicians is the way of behavior in Europe. The Europeans seem to be more grounded, down to earth while the Americans in Europe always want to celebrate their star status.

Richard named especially one musician: Paolo Fresu, the star trumpet player of Italy, who is together with Richard and Jan Lundgren (p) responsible for an European magic moment of Jazz: MARE NOSTRUM – a masterpiece!

This album shows how Europe can compete with America in Jazz. This extraordinary trio presents on Mare Nostrum a surprising diversity of themes with different background and opens to other musical cultures and develops the music futher in an own language. Influences of Swedish folk songs, French chansons, bossa nova or even Turkish poems and classical music can be heard.

René Hess wrote the liner notes of this album to the point: “this is the Jazz with a contemporary tinge that provides a taste of the future: exciting, highly emotional and full of daringly creative artistic exchange.” Unfortunately there are actually  no plans for a further continuation of this project.

Richard explains us some of this upcoming projects. Actually there are some preparation for another classical album for Deutsche Grammophon together with the actual band. This album will feature the music of Antonio Vivaldi!  This is more or less the same formation of musicians as we could hear in the BACH project last year.

Additionally another Jazz production is planned for the Resonance Jazz Label in California. The musical partner for this session is still a secret.

At the end of our chat we asked Richard another difficult question. We usually end our interviews asking musicians about theier three biggest wishes in their life. Richard only laughed and mentioned that this is easy: Physical health for him and his family is the most important wish for him. Connected to that he would love to play many, many more years and he wishes that his audience will share this passion with him. The last wish is simply that the planes he regular travels with will never crash down.

It was a lovely encounter with a really nice person who demonstrated groove, joie de vivre and easy going attitude. Richard Galliano shows that real splendor comes from inside.

Some more information you can find there: