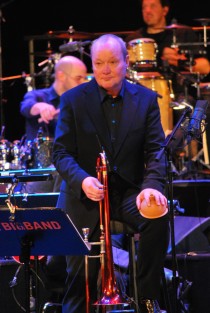 Born in 1956 in Värmland, Sweden he started his music career as drummer at the age of 6 before he changed learning trombone when he was 13.  He studied classical trombone in Sweden. He toured with Swedish pop stars and in 1981 Thad Jones invited the young guy to take the lead-trombone chair in his big band project.

From that time onwards he is involved in a lot of different projects which made him to one of the most important European Jazz musician alive. Some of his projects can illustrate the immense variety of his interest and influence:

Nils Landgren Funk Unit – founded in 1992 and still touring from time to time. One of the interesting CDs there: FUNK ABBA – Abba songs influenced by Jazz, Funk and HipHop …. Simply great.

His personal and musical relationship with the late Esbjörn Svensson showed a different type of music. There they published some CDs with Swedish Folk songs rearranged for piano and trombone – breathtakingly relaxing and traditional!

Together with Ebsjörn he is responsible for the Northern influence in Jazz for the last decades by featuring and supporting new voices and musicians to a wider audience like Victoria Tolstoy and Caecilie Norby.

He used his voice for the first time on CDs while collaborating with Joe Sample – e.g. Creole Love Call.

He was for several years the director of the JazzFest Berlin and took over the responsibility for Jazz Baltica in 2012.

In 2011 his latest album “The Moon, the Stars and You” has been released where he performs with friends like Michael Wollny a lot of pop and jazz standards not only playing but also featuring his voice more than before!!!!