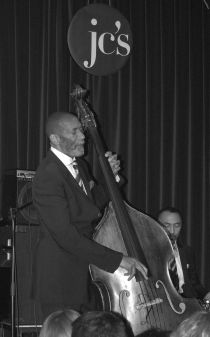 Ron Carter - 75 years young, born in Michigan and THE american Jazz Bass player for  many many years. He accompanied more than 2500 record sessions in his life and seems to be the busiest bass player worldwide. He started his career in the early 60s of the last century and a larger audience recognised this gentlemen since his time as a member of the second Miles Davis Quintett together with Herbie Hancock, Wayne Shorter and Tony Williams.

Since that time this guy is still touring and performing a lot of own projects. In Istanbul - at JC's (see also Clubs) he performed in March 2012 with his Foursight-Quartett (Renee Rosnes, p / Rolando Morales-Mattos, perc / Payton Crossley, dr) a little tour across Europe (e.g. Ronnie Scotts in London and JC's in Istanbul). The idea seem to be to develop and perform jazz standards with latin rhythm: it started with Miles' "So What" and continued with a lot of interesting material (from parts of the Concerto de Aranjuez, You are the Sunshine, My funny Valentine ....) not a bad idea but it is - from my point of view - not fully successful. The percussions are not carrying the groove of the songs to a higher level, the whole thing doesn't swing enough. The percussionist didn't fully convince us but we liked very much Ms. Renee Rosnes and her piano lines .... all in all still worth seeing this "real gentlemen" performing. He is - despite his age - still a young and attractive guy (the girls around mentioned).

How did he explain his work as a leader? What are the most important three things there? You can choose the ties for the band (most probably still the best dressed band in the world), you can play with the friends you like and you can choose the songs to be played. 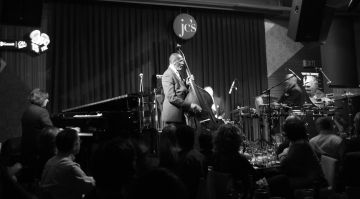