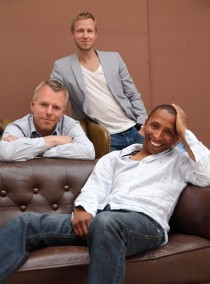 Over the last few years the Tingvall Trio has played itself straight to the top of young Eiuropean Jazz ensembles. Based in Hamburg, this Trio consisting of the individualists Martin Tingvall (piano, Swedish), Omar Rodrigues Calvo (bass, Cuba) Jürgen Spiegel (drums, Germany) is developing a cross over jazz, often based on meldoies of Scaninavia and further developed with influences of Latin music, Pop and Rock. The result is that the Tingvall Trio is winning over a completely new listening audience for Jazz.

2010 and 2012 the Tingvall Trio received the Jazz-ECHO award in the Category "Ensemble of the Year national", the magazine Jazzting elected the band 2012 "Live-Act of the year".