Last night was GRAMMY NIGHT!!!! Beside the shiny winners of all directions of music our interest is in the Jazz winners and we see also an interesting award for European Jazz!!!!!

First the Jazz Vocal Album has been awarded to Gregory Porter and his LIQUID SPIRIT. We expected a grammy already for his last album but this year it worked! He received for his latest album his first Grammy - and to be honest: it is a great album which will support to turn this wonderful singer finally as the Jazz Singing Superstar he already is! Congrats Gregory! Just listen to the title song ....

Teri Lyne Carrington won also a Grammy (in this case not for the first time) for their album Money Jungle: Provocative in Blue (Jazz instrumental album).

The biggest surprise from our side was the section: Large Jazz Ensemble Album: Night in Calisia by Randy Brecker, the Wlodek Pawlik Trio and Kalisz Philharmonic. To be honest we never heared the name of Wlodek Pawlik before but this album is worth listening and Wlodek Pawlik, piano shows what great composer and musician he is and we should not forget: he represents Europe this year in the Grammy awards!!!

The Swedish-Cuban-German Trio Tingvall trio is again on tour. Today we saw them in Lantaren Venster in Rotterdam! The concert wasn't sold out - we only can say: people you missed something!!!

This trio is performing together for many years, they recorded in the meantime 4 studio CDs and recently a LIVE-album and they still sound great, authentical and very, very lyrical. The songs - mainly written by the leader Martin Tingvall - are beautiful compositions where you can feel the nordic homeland of Marting in every single tone of his piano. On this basis we hear latin bass rhythms of Omar Rodriguez Calvo and the rocking drums of Jürgen Spiegel ... they are a great team together and you can see it when they perform: they are friends having fun with their music.

And the fun is fully on our side when we hear them performing!! And we learned the good news: we heard some new songs which will be on their next album which will be recorded in around two months! Looking forward to hear more!!!

Crossover is always an adventure and brings a new sight on things. We always feature our friends of the R.S.Q.V. but this time we would draw your attention to the MODERN STRING QUARTET and their Mercy, Mercy, Mercy Project.

Avantgarde and classicals will find an excellent combination... If you are in Bavaria next week, do not miss it!!! Just listen ..... 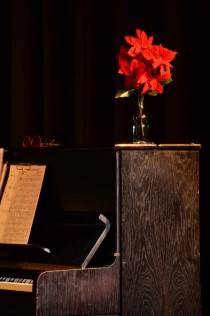 we wish you all a wonderful 2014! It will be exciting, there are so many excellent music ahead of us, so many wonderful festivals and concerts everywhere.

From 2014 onwards we will report directly from our new location in the Netherlands but we will have our 'old' places like Istanbul, Vienna, Berlin, Dresden still in focus.

We are planning to report from several festivals and concerts, we will bring some new interviews and hope to meet you here and there to get in touch with other enthusiasts.

Just let us know what you are interested in so that we can focus on your wishes, too.