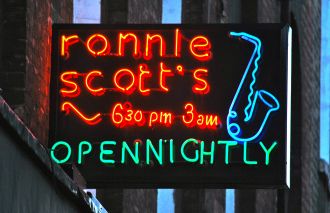 In the center of Soho, THE entertainment area of London, one of the most famous Jazz clubs of this world is located: Ronnie Scott's Club.

Founded by the Jazz tenor saxophonists Ronnie Scott (he died in 1996) and Pete King in October 1959 and is one of the most important clubs of this world. After Scott's death, Pete King continued to run the club for a further nine years, before selling the club to theatre impresario Sally Greene in June 2005.

All the big names have been played there and the story still continues. In these days superstars like Ron Carters Foursight, Chris Potter, Michel Legrand, Georgie Fame & the Blue Flames or Ginger Baker (well known as one of the CREAM-trio of the late 60's) are still playing there.

Be quick to make your reservations ... most of the shows are sold out soon.﻿