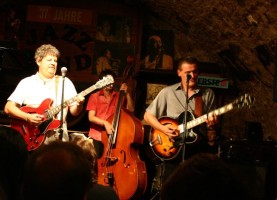 Exactly 40 years ago (in March 1972) this Viennese jazz club has been founded by Axel Melhardt who is still running this legendary club. It is located on a very hidden place in the oldest part of Vienna in a cellar down the Ruprechtskirche and on six days a week the old walls are rocked by phantastic jazz of all styles.

Almost everyone of the "who is who" in Jazz played here:  Monty Alexander and Ray Brown had a lot of fun in several concerts, Joe Pass, Eddie "Lockjaw" Davis, Big Jay McNeeley, Joe Turner, Dexter Gordon, the Heath brothers, Wynton Marsalis, Dana Gillespie, Diana Krall (!!) before she was considered a superstar to name only few of the big names. Some of them came with their own bands, some were accompanied by local jazz musicians - there is always an excellent mix.

One name is also very much connected with this Club: Art Farmer. He once came as a juror of a local festival, met the girl of his life and lived the rest of his life until 1999 in Vienna. As soloist of the ORF-Bigband he worked on a regular basis but his real life were the concerts with his Austrian band, jamming in Jazzland regularly.

Not to mention that also allmost all Austrian Stars played there - only Joe Zawinul and Hans Koller couldn't be engaged as their prices were too high.